Sky Racket is one of the most refreshing games I’ve played in the last few months, a mix of sheer enjoyment and curious lapses, and yet, I can’t stop playing. How best to describe it? Imagine playing a shoot ’em up like Gundemonium Recollection crafted in a world inspired by a Catalan retro architect, with input from memorable brick breaker games such as Shatter and Breakout. After merging the two together, you begin to get the idea of what the game is about.

If you’ve already been fortunate enough to play Sky Racket, then hopefully by now you’ve immersed yourself in the action-packed visual feast the game has to offer and are on your way to shooter heaven. The premise of the game is as old as time itself: an evil force has taken over the world and it’s up to Racketboy and Racketgirl to do their part to save it. Using the power of ‘The Racket’-a powerful gadget that deflects incoming objects back at the enemies-Racketboy/girl embark in a world that one would think was created by the Crayola Crayon company.

Visually, the game is a sight to behold. With its retro-influenced art style and layers upon layers of streaming parallax backdrops, no shooter in recent memory has had quite the visual impact this game has. Though lacking a bit in complexity, the 2D effects are simply pleasing to look at with the backgrounds serving a lot more than just passing eye candy. The scenery and enemies work together to seemingly create a world that isn’t just colorful, but alive. Confounding waves of wicked pattern-based foes merged with psychedelic environments, the game provides a gameplay experience like no other. Even now, there are very few shooters out there that match Sky Rackets’ dynamic but cute intensity.

Another stand out feature is with its weapon system; or should I say without it. As I’ve mentioned prior, Racketboy/girl does not possess any attack abilities of their own. Instead, they use their rackets to strike enemy balls back at the bad guys. This alone adds to the replayability since every ball deflected bounces and ricochets in all directions hitting and destroying everything in sight including falling cats, flying ducks and a banana boss that has to be seen to be believed. The physics of the ball bounces are dynamic, ensuring you won’t play the same stages the same way.

The controls are tight and responsive and everything moves along smoothly with no noticeable slowdowns whatsoever despite the chaotic action happening on screen. Granted, we played the game on an RTX powered rig, but you should still get really good frame rates even on a modest PC. The music and sound effects match the aesthetics perfectly and heighten the intensity with beeps and bloop that harken back to the old days. 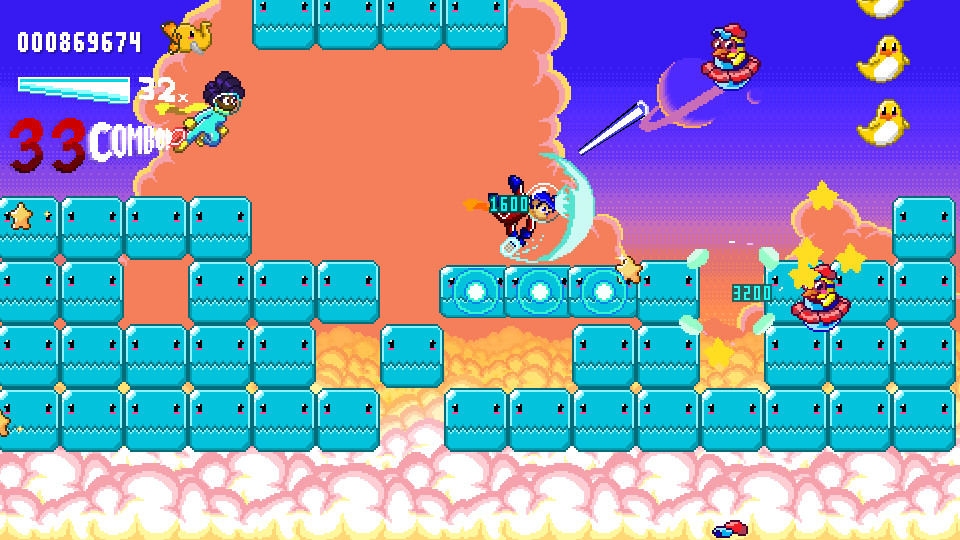 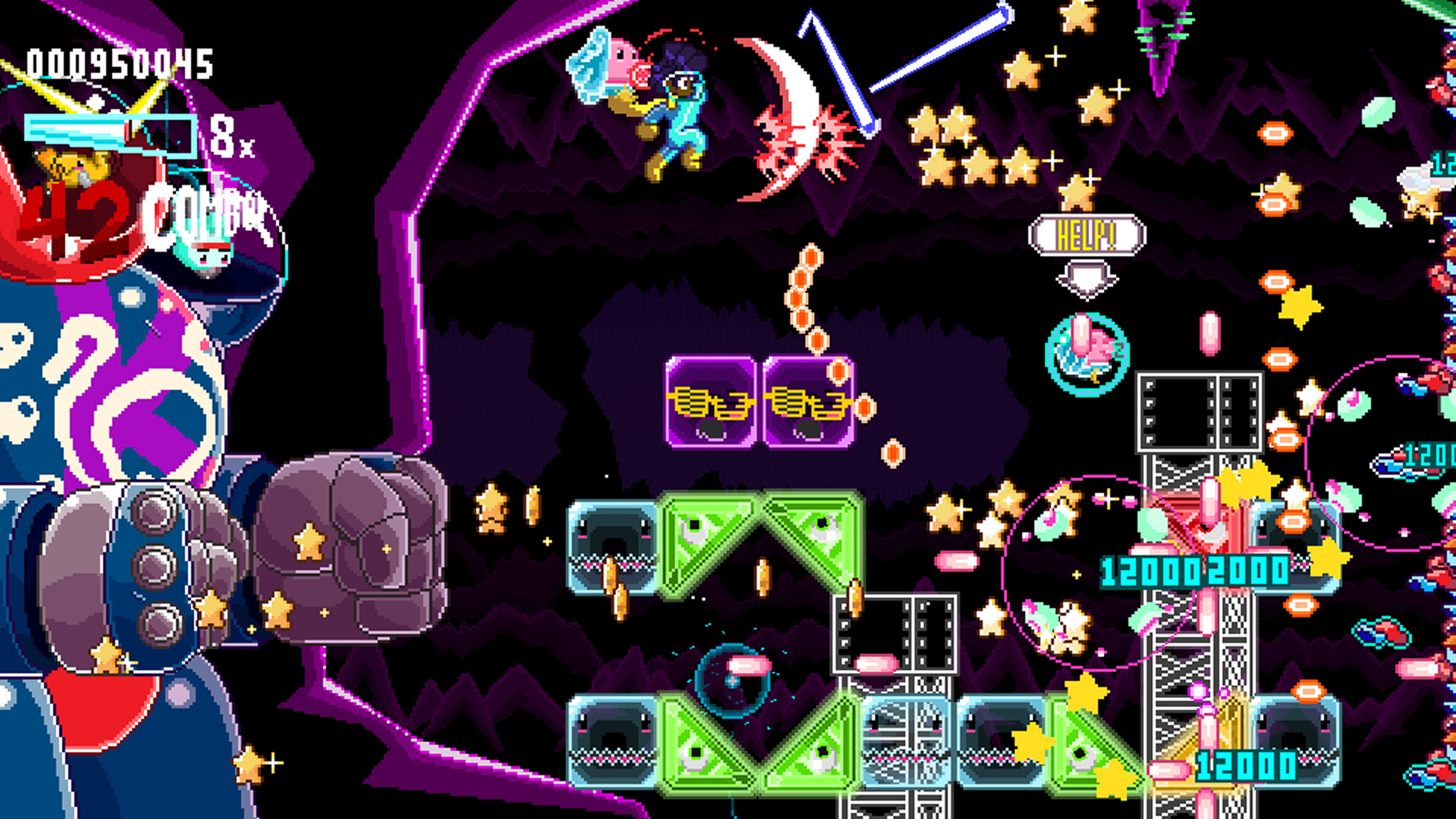 Despite my initial praises, there are several flaws that need to be mentioned. One, the game is on the short side taking less than seven hours to complete. I’m sure we could replay through it again on a higher difficulty, but once you’ve seen all the game has to offer, it becomes a moot point. Hopefully, some added content and DLCs come out to keep the action going. Second, one of the bosses is harder than the final question in Jeopardy. I understand the need to keep the challenge up, but going numerous rounds with him borders on frustrating. And last, the colors of the enemy projectiles (the ones you avoid) and the balls (the ones you hit) are pretty similar making the distinction between the two rather difficult. This has caused me numerous times to avoid the ball and to hit the lasers instead–ending in an untimely death.

Aside from those minor critiques, which I’m sure the developers will take care of, Sky Racket is a solid title that should be in your gaming library. Just like peanut butter and jelly, ham and cheese, and Laverne and Shirley, Sky Racket takes the best of two genres and blends them beautifully together to create such a wonderful little experience. I know this type of hybrid has been done before, but developer Double Dash has done it with humor, polish, and a little bit of child-like magic.

OVERALL
A wonderful game that takes the best of two genres and combines them to make one hell of a game! GO. BUY. IT. NOW!

haha can’t go wrong with a game that grandma luvs =)

For a indie gaming site, this is actually a well written review

[…] this month we reviewed Sky Racket, an unconventional, and yet so addicting shoot’em up from indie developer, Double Dash Game […]