A gentle breeze of wind floated across my face as I gunned the throttle and anticipated the starting lights at Germany’s famed Hockenheimring. I heard the blast of the horn and watched all five lamps glow from red to green.  There was no turning back now. I was there to race.

Gripping the inside track, I paced myself behind the car in front of me looking for an opportunity to pass. Too much power and unexpected wheelspin occurred. I eased off the accelerator gently and maneuvered to my right, hoping to get into a better position before the first dreaded hairpin. Up through the gears I went with my gloved hand still clutching the wheel tightly. The Ferrari in front of me is zigzagging wildly. I pump on the brakes, but that caused the car to fishtail slightly and I was headed towards the safety barriers. Luckily, the  Renault beside me took evasive actions and allowed me enough room to compensate for my mistake.

A slight downhill and through the next slippery turn, I watched in awe as the next two cars in front of me got tangled up sending both spinning out of control in a dusty haze of white smoke. Taking advantage of the situation, I streaked past the accident and punched it all the way through the narrow straightaway. Still shaking and bobbing, I maneuvered myself tightly in the top 15 slots. This was my first real opportunity to take stock. With beads of sweat slowly forming on my forehead, I quickly grab a towel to wipe my hands with. This isn’t just racing. This is an experience.

The scenario above is a good indication of F1 2019 Anniversary Edition’s main purpose: to totally convince you that you are actually at the controls of one of the fastest cars in the world driving in one of the most legendary racetracks ever designed by man. The fact that even the AI drives behave and respond realistically to the actions going on is unprecedented in a racing game this complex.

I won’t bore you with a long-winded review, because quite frankly, if you’ve read this far, then you’ve probably already purchased the game or leaning heavily towards doing so. If you’re still not convinced at the brilliance of F1 2019, then take it from someone like me who grew up playing perhaps the greatest F1 simulator ever, Microprose Grand Prix 2. While you can’t compare a game that came out in 1996 with one released in 2019, what you can do, however, is compare them based on their merits in terms of racing authenticity. Though Grand Prix 2 will always remain a classic in the eyes of racing aficionados, it was also hindered by poor physics and questionable situational awareness.

F1 2019, on the other hand, has a lot going for it, the most obvious is the physics-based driving. If you’ve ever spent much time driving on the freeways of Los Angeles as I have, then you’ll know what I mean. The acceleration, braking, turning, and passing are all physics-based. Now imagine doing that at 100x the speed for several hours and you’ll start to get the picture.

The key to driving an F1 car is the subtlety and control over wheel spin that only really experienced sim drivers can master. The F1’s delicate balance of power and finesse is achieved by tapping the gears accordingly and gently feathering the pedals based on the race situation around you. This isn’t Need for Speed, and pressing hard on the throttle nonstop isn’t going to get you much here.

Another realistic impact F1 2019 brings to the table is the realization that in order to come in at a respectable finish, you’re going to have to drive smarter -not faster- than the other drivers. To compete here, you must be totally aware of your surroundings and the nuances of the track itself. I don’t think I’ve ever played a racing game where this scenario ever made me become more vigilant in the environment I was in. 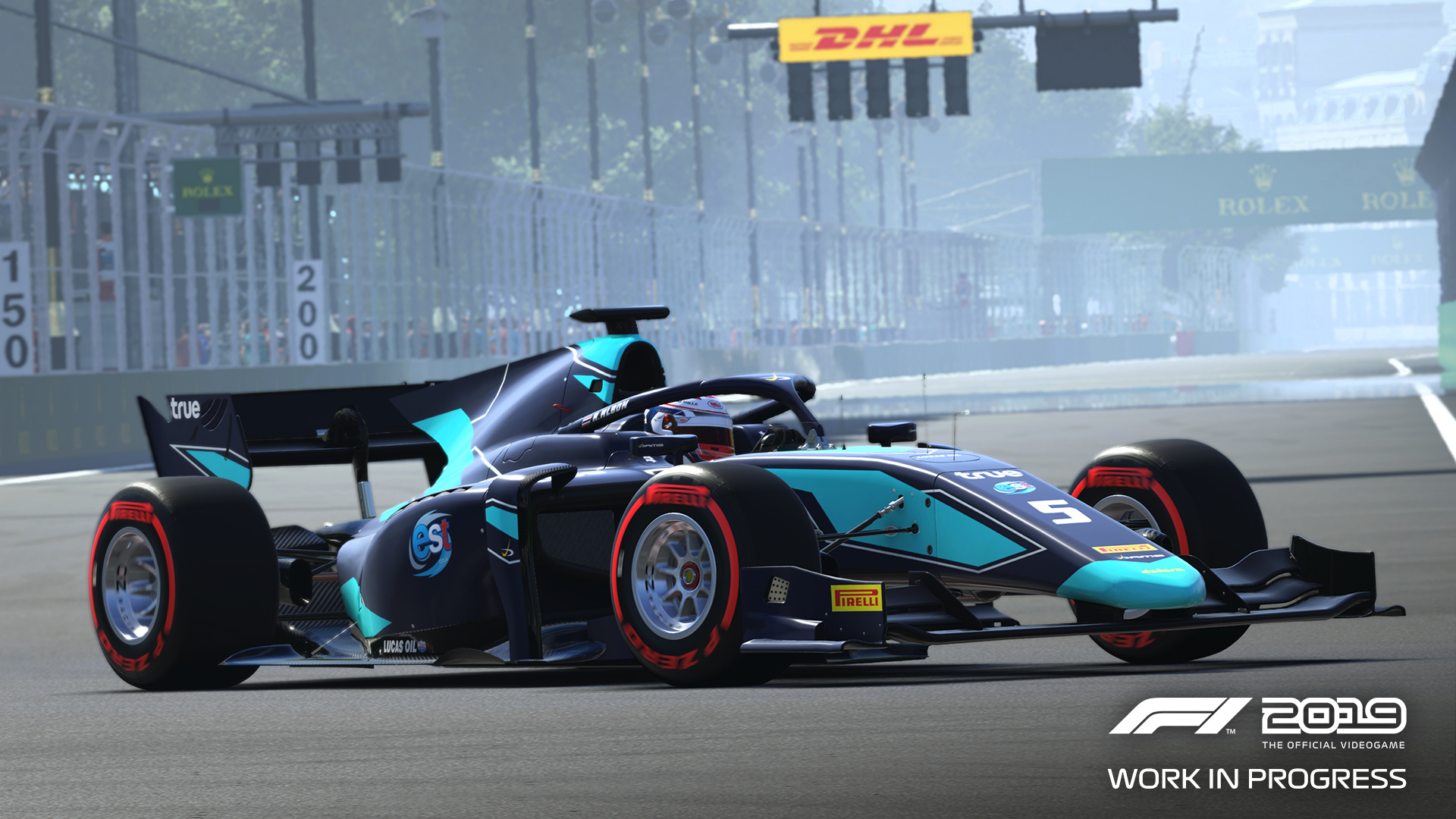 There’s not enough room here to go into details about all the details Codemasters implemented in F1 2019. Graphically, the game looks absolutely stunning. I played it on an RTX 2080 and couldn’t believe how realistic it looked. In fact, a few people who watched me play thought it was an actual ESPN broadcast. Be forewarned though, you’ll need a pretty beefy machine to activate all the bells and whistles the game has to offer. If you’re a racing purist and have been thinking about upgrading your graphics card, this is the game that will definitely convince you to do it.

Despite my high praises, there are a few blemishes on this fine paint job. One, online still is a hit or miss. I’ve been able to find and race in a few online matches, but those have been far and few. Second, I was experiencing unexpected freezes and crashes in the first few weeks, but a recent hotfix released by Codemasters seemed to have remedied that issue for now.

But don’t let those couple of concerns worry you. This is a game that has continuously gotten better year after year, and there is no doubt that this is where you want to be if you want to satisfy that racing itch burning inside you. There’s a new king in town, and F1 2019 wears that crown deservingly.

OVERALL
If you love racing games or true to life simulations, then F1 2019 is for you.

Amazing game! I own 2018 and thought it was amazing, but 2019 improved on that and I really didn’t think they could. Graphics, sound, and controls have all improved. 9.5/10

I love the game it is pretty much the best F1 game and one of the most realistic racing games out in the market.